What's next for Sevy, Betances, etc...

What's next for Sevy, Betances, etc... 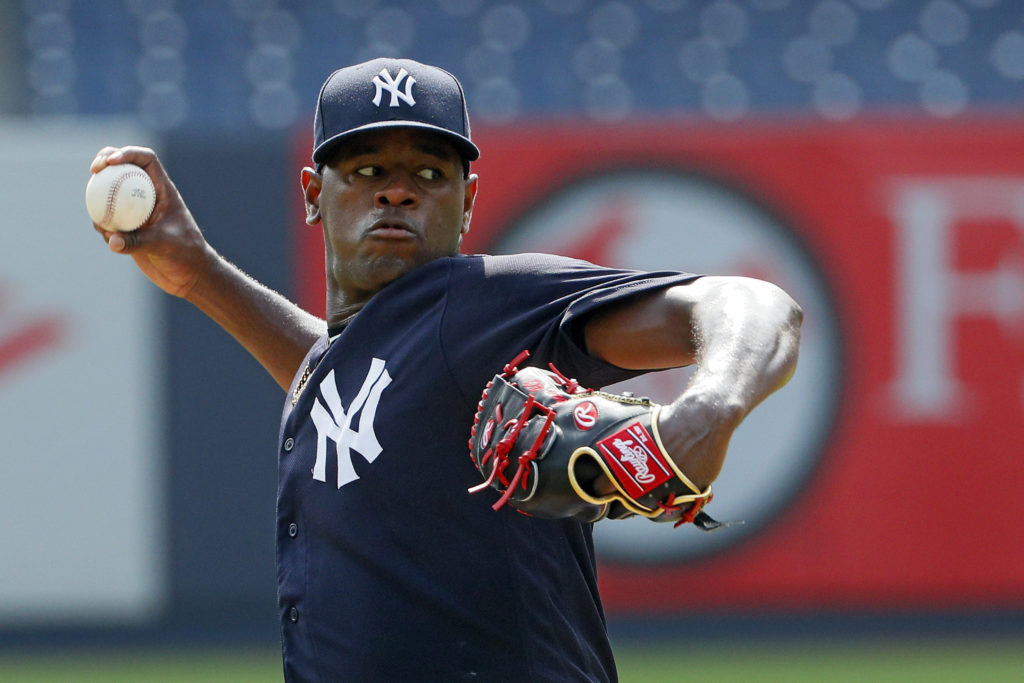 BOSTON — The next time Yankees right-hander Luis Severino takes the mound, he might be finally doing it in the majors for the first time this season. After losing almost the entirety of the year due to a shoulder and lat issue, Severino on Friday night made his second rehab start of the month in a playoff game for Double A Trenton, throwing fifty pitches over three-plus innings.

Yankees manager Aaron Boone, who described Severino’s first outing of the year for Triple A Scranton on Sept. 1 as resembling a first outing in spring training, said before the team’s 6-1 loss in Boston that Severino could come off the injured list following his outing for Trenton, depending on the results. If so, Severino would be lined up to face the Detroit Tigers next week, taking an important step on the path to October.

Facing 14 batters on Friday, Severino allowed five hits and one run on a home run for Trenton. He didn’t walk a batter and struck out five. Reporter Matt Kardos said the right-hander sat at 94 to 96 miles per hour and reached as high as 97 throughout the night.

If Severino is activated following his second rehab start, he will have time to make four or so starts for the Yankees in September. In that time, the plan for his postseason usage would become more clear. Severino threw 33 pitches in his first outing for Scranton, but threw more in the bullpen after he was out of the game. The progression to 50 pitches in-game on Friday night would indicate his next outing could have him up to 60-65 pitches. (Severino told reporters he threw five more pitches in the bullpen on Friday night to get him to 55 for the evening.)

Following the Yankees’ loss to the Red Sox, Boone said the team will have discussions over the next 24 to 48 hours about the next step for Severino.

“Whether it’s something where he needs one more (outing in the minors) if that would be beneficial, or if it’s better now to just come with us and build up that way,” Boone said.

Severino’s potential return soon provides some more solidity to an intriguing option for the Yankees this postseason. What he will look like against major-league hitters is still very much unknown. But with a comfortable division lead and only three realistic options for the postseason rotation at the moment, New York getting Severino ready right in time for October could be its most fortunate break of the season.

“He could get built up pretty high, and you can obviously always throttle back,” Boone said of Severino. “I could see him in a variety of roles for us. The biggest thing is making sure he’s physically sound and bouncing back, because I think we all understand how valuable he could be to us going forward, and it could be in a lot of different roles, frankly.”

If Severino does return to the majors after his Friday outing, he will be the first of the big four the Yankees are hoping to have healthy in time for the postseason. Following Severino’s innings in Trenton, right-hander Dellin Betances threw 19 pitches to five batters in one inning. Betances allowed a walk, hit one batter, and struck out one to complete his first game appearance of the year.

Most likely, Betances’ remaining outings in September will be to build up his arm strength and get his velocity back to the mid- to high-90s heat he’s known for. After a recent simulated game at Yankee Stadium, Betances said he felt his breaking ball was working for him and that he could get major-league hitters out with the pitches in the state that they are in currently.

“I think in a lot of ways he had a little bit of a breakthrough in his last sim game where he started to get a little confident,” Boone said of Betances. “He was sharp, the stuff was good. So hopefully he can build on that and (Friday) would be another positive step.”

Fortunately for the Yankees, Trenton advanced in the Eastern League playoffs and could be playing until Sept. 15 at the latest. (Trenton next plays on Tuesday while the Triple A RailRiders are down 0-2 in their own playoffs.)

But for outfielder Aaron Hicks and especially outfielder and designated hitter Giancarlo Stanton, the minor-league schedule may not provide them the opportunity to take the traditional route and rehab through game action. Though both are doing baseball activities and taking live at-bats, they may have to build up for their respective returns primarily through simulated games.

Stanton, returning from a right knee injury, played in a simulated game on Friday in Tampa, according to The Associated Press. His return is still on a vague timeline, but ideally he would be able to get two weeks of major-league at-bats before the Yankees head into October. Hicks, returning from an elbow injury, might be on a faster timeline for return since he has played in more games than Stanton this season.

If the Yankees’ hitters do have to take the rehab route through simulated games in the final weeks of the season, they won’t be the first to have to do so. In Houston, Carlos Correa has been on the injured list with back issues and seems to also be on that path back to the active roster.

In 2016, the Cubs were able to send Kyle Schwarber to the Arizona Fall League to get at-bats following an ACL tear that had kept him out for almost the entire regular season. For various reasons, particularly a lack of eligibility, that is not an option for Hicks and Stanton.

Throughout these processes — from Severino and Betances to Hicks and Stanton — Boone has said the team will employ a “creative” approach to building them back up for when the games really begin to matter.

Getting Severino back with a few weeks left to go in the regular season will give New York some options for managing his usage and workload in October. The pitcher believes he could be ready to give the Yankees full, unabbreviated starts by the end of September. For now, Severino’s next step toward his return is still under consideration. But his season debut, long-awaited after months of misfortune, could finally be right around the corner.
0 x
-------------------------
T15D23

Users browsing this forum: No registered users and 24 guests