Michael Kay "I have to change."

Michael Kay "I have to change."

‘I have to change’: Michael Kay (via emails) and his doctor on the broadcaster’s repaired vocal cords
Evan Drellich 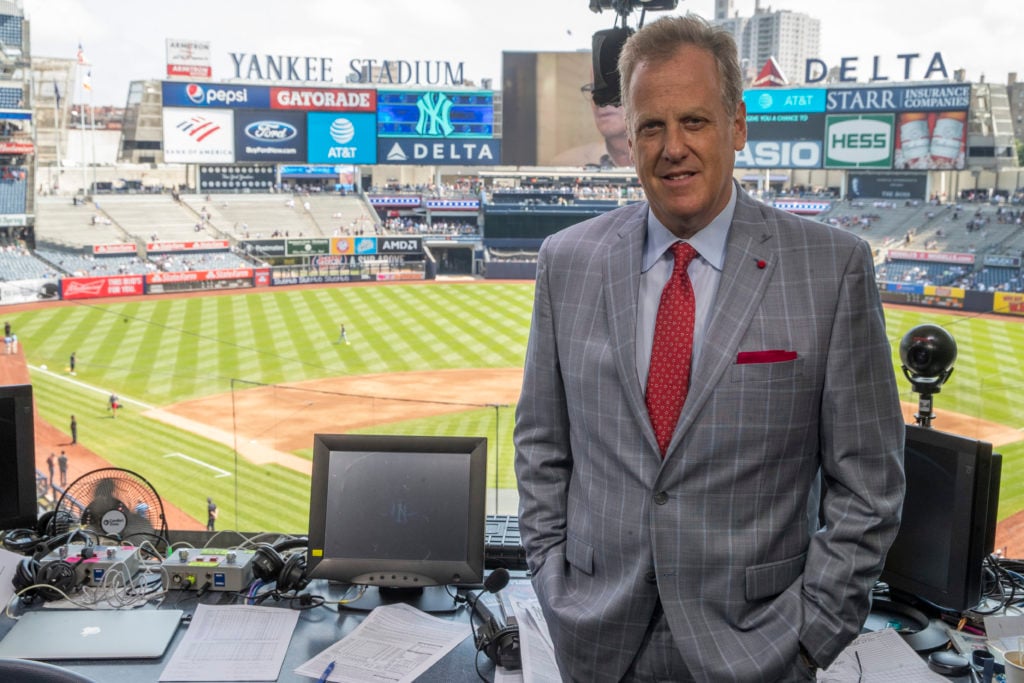 A man paid to talk must talk less.

“I have to change,” Michael Kay said.

The television voice of the Yankees needs to limit charity events, or any other appearances as an emcee. Almost exclusively now, his phone is for texting. In loud rooms, he is quiet, saving his strength for listeners.

“Talking on a phone is a killer, because you can’t modulate your voice and you’re always talking over ambient sounds,” Kay said by email. “I’ve had to turn down podcasts and I won’t be able to do phoner interviews on radio shows. That stinks, because a lot of the people that ask are friends. But I simply have to say no at this point, and will probably say no the majority of the times moving forward.”

The anxiety Kay felt after a June surgery on his vocal cords has started to subside, at least a bit. He missed five weeks of work, returning to the YES Network booth first, then his radio show last week on ESPN New York. Most of that time was spent quietly.

“You realize you can’t use the drive thru at McDonald’s,” Kay said, “and you can’t raise your voice to stop your kids from doing something they shouldn’t.”

His livelihood was inherently threatened, although probably not to the extent inquiring minds and his own fears suggested: would he have to walk away from one of his jobs, or both?

Given the early results, and the outlook as explained by his doctor, Kay agreed there’s no reason for those considerations right now.

“It’s going very well,” Kay wrote Monday morning. “Each day it has gotten better and stronger and going into today’s game I’ve done 10 straight games with no incident, and last Friday I did the radio show and the game for the first time in one day and it worked out fine. I feel great and am much more relaxed and less anxious than I was about the future and my ability to do this for a long time.”

Contrast that with Kay’s words from 12 days earlier, when he wrote: “I can honestly say it is always on my mind. I have found that as the game goes on, it is less of an issue where I am constantly stressing about it. But in a big moment, when I really have to emphasize something or raise my voice, I am cognizant of what I am doing and somewhat tentative.

“Every time my voice cracks now, I panic and think ‘here we go again.’ I’m probably paranoid but I don’t want to ever go through this again.”

Kay’s surgeon, Dr. Steven Zeitels, is the chief of the Center for Laryngeal Surgery and Voice Rehabilitation at Massachusetts General Hospital. He has a strikingly long history of repairing the most prominent vocal cords arounds: Adele, Joe Buck, Sam Smith, Steven Tyler, Dick Vitale. All the finest crooners, indeed.

What Zeitels saw with Kay is something common in the world of this doctor: small polyps, or growths, on the vocal cords from hemorrhaging, as well as bleeding into the vocal cords. “Pure trauma,” as the doctor put it. A trader on Wall Street who goes 12 hours a day with no time for recovery can wind up in the same boat.

Kay, though, has an advantage singers do not: he does not have to perfectly reach a range of notes. But a raised volume, yelling — as incited by home runs, or perhaps moronic callers — undoubtedly impacts the vocal cords more than regular talking. Vocal cords feature the densest nerve wiring of any area of the human body, Zeitels explained, seven times more than the face.

Some prednisone, an anti-inflammatory, helped Kay get through Old Timers’ Day, including the regular game that followed. He got through one more game before trouble cropped up in the next, sending him to an ear, nose and throat specialist. There, the blood on his vocal cords was discovered, and a recommendation was offered: talk to Zeitels.

“Zeitels told me there was bleeding on the cords and that I had two (polyps),” Kay said. “He said I would eventually have to have them removed. I could try to get through the season, but it could keep occurring. He also told me had an opening for a surgery the next Tuesday.

“I thought it over, looked at the schedule ahead and the games I was actually scheduled to have off, and figured that if this world renowned doctor could squeeze me in that quickly, I should do what has to be done as soon as possible.

“That was an excruciating call, because I had never missed an assignment in 28 years as a broadcaster. Never. In fact, I don’t think I ever called in sick when I was a writer for the New York Post and the Daily News. It’s the way I was brought up and having to step away gave me an incredible sense of guilt. But I had very little choice.”

If you’re interested in the technical: during the microsurgery, Zeitels also photocoagulated previously-injured fragile blood vessels in his vocal cord with a unique green-light laser, a technique he created about 15 years ago. The fragile vessels that caused Kay to recently bleed into the vocal cord were previously injured, the doctor said.

Zeitels has two patents for the laryngoscope that he used for Kay and others. Unsurprisingly, Zeitels said he does not have time to listen to sports radio during the day, although his parents are from the Bronx. His teenage son loves baseball, so the doctor is rediscovering his own affinity. Almost 50 years ago, Zeitels saw Bobby Murcer homer in four consecutive at-bats at Yankee Stadium, during a 1970 doubleheader.

Kay watched practically every Yankees game while he was out. And that was not necessarily, or not exclusively, as a voyeur, wondering what would happen in his stead. He wanted to be sure he knew what he needed to upon his return.

“I feel it was the only thing to do because of the pride I take in my job. But it was difficult and also illuminating in that it is a stark slap in the face that the world goes on without you when you’re not there,” Kay said. “I made the comment the other day that cemeteries are filled with indispensable people and whenever you have the predisposition to feel really important, step away and see that the planet continues to spin on its axis even without you.

“The guys who stepped up when I was out did a great job and for that I am grateful.”

The only pain Kay said he suffered came in the days immediately following the surgery. But the breaking point for his voice may actually have come June 19, at a fundraiser for Cone’s foundation. He spoke in a large room filled with people, straining to get words out over the noise.

“Events like that really put a strain on your vocal cords,” Kay said. “I’m not saying that was the seminal moment, but all the years of overuse are just brought to a breaking point when you have to kick it up a notch. And I don’t regret doing the event, because I would do anything for David, but in the future, I am going to have to be very discerning about doing those types of events moving forward.”

Recurrence is uncommon, Zeitels said. Similar to other injuries, it can happen “if an individual does not modify the extremes of vocal activities sufficient,” he said. Zeitels too thinks more coaching would benefit people relying on their voices to get in front of any problems.

Kay’s approach seems to be erring on the safe side: to keep talking, don’t talk as much.