The Rockwall, Texas product has had a historic season in the Lowcountry, entering the final eight games of the year with a .305 batting average that ranks third in the league, an on-base percentage that ranks T-2nd (.404) and an overall OPS mark of .863 that places him third among all qualifying hitters in the circuit. Highlighted as one of the top 11 position players in the league and the top vote-getter at left field, he is the third RiverDog in the past four seasons elected to the Postseason All-Star team.

"We are all extremely proud of Canaan. I think it is well-deserved for him to earn this prize," said RiverDogs manager Julio Mosquera. "I think if you look at the numbers and all the things we talk about these days from a complete hitter, you're talking about walks, you're talking about on-base percentage, you're talking about hard-hit balls and quality of the at-bats, and the way he goes out there and plays his game at The Joe that plays a little bit tougher than other ballparks, he's been deserving and he's played tremendously the whole season."

Among the league's 2019 selections, Asheville's Terrin Vavra was named the SAL Most Valuable Player, becoming the fourth Tourist in the last seven seasons to garner the award. Augusta lefty Seth Corry was tabbed the league's Most Outstanding Pitcher and Delmarva righty Grayson Rodriguez the Single-A circuit's Most Outstanding Major League Prospect. Shorebirds skipper Kyle Moore was named the Manager of the Year after guiding Delmarva to over 80 wins on the campaign.

With 10 home runs and 12 stolen bases on the year, as long as Smith maintains an average over .300 for the remainder of the season, he will be just the sixth player in Charleston's history as a South Atlantic League franchise (circa 1980) to hit over .300 while adding double-digit homers and stolen bases, joining an illustrious list that includes Tyler Austin (2012), Delmon Young (2004), Josh Hamilton (2000), Fernando Tatis (1995), and former SAL batting title winner Cliff Pastornicky (1982). Heading down the final week of the season, Smith is the only of the exclusive list to have walked 70 times; only Tyler Austin also maintained an on-base percentage over .400.

Originally a fourth-round selection by the Yankees out of Rockwall-Heath High School in 2017, the lefty bat has shown a tremendous turnaround in his third year as a pro. With Staten Island in 2018, he hit a career-low .194 with five home runs in 64 games in the New-York Penn League. After failing to crack Charleston's Opening Day roster at the onset of 2019, he would be called up as an injury replacement for Isaiah Pasteur just a week into the season. After a tentative 0-for-10 start, he established himself as a regular in the lineup, slowly climbing his way up Julio Mosquera's batting order and finished the year as the premier hitter in the three-hole.

Smith's most impressive stretch of the season started in mid-July, when he went a blistering 25-for-50 over a 15-game stretch from July 18-August 3, a span in which he ranked second in Minor League Baseball with an astounding .609 OBP. He has cut his strikeout-rate 10 percentage points down from a career-worst mark at 30 percent last year and leads the South Atlantic League with 70 walks drawn on the season. At the season's midpoint, he was named the Southern Division starter at left field as one of Charleston's six All-Star selections.

The Santo Domingo, Dominican Republic native was also named a first-time 2019 Mid-Season All-Star and won the FSL Home Run Derby before he was placed on the injured list on 7/9 with a season-ending injury.

At his promotion, Yajure ranked tie for first in the FSL in strikeouts, second in ERA and WHIP (1.08), tied for second in innings pitched and tied for fourth in opponent BA (.233). 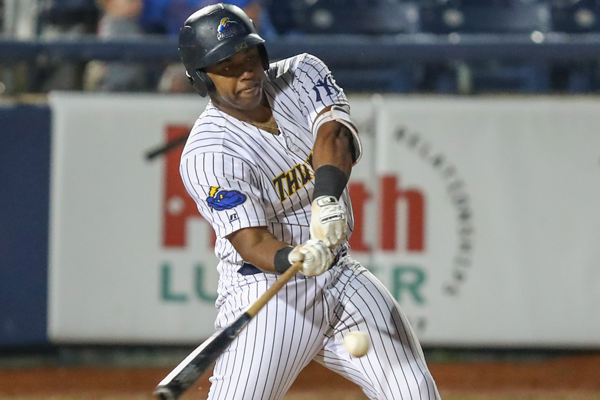 The Thunder will honor Gittens with an on-field presentation prior to Saturday's game with Reading at 7:00pm.

Gittens, who was named to Eastern League's All-Star Team during the season and Postseason All-Star Team, becomes the second player in franchise to earn the league's MVP award after Brandon Laird took home the hardware in 2010. Gittens's two-time All-Star selection makes him the 16th player in franchise history to be selected to both Eastern League All-Star Teams. 2019 marks the fourth straight season in which the Thunder have had a player named to both teams, following Jordan Montgomery and Tyler Wade in 2016, Thairo Estrada in 2017 and Trey Amburgey in 2018.

The Thunder return to ARM & HAMMER Park on Friday, August 30 to begin a four-game series with the Reading Fightin Phils. Tickets are available online at www.TrentonThunder.com.
0 x
"Leave the gun. Take the cannoli."
Top 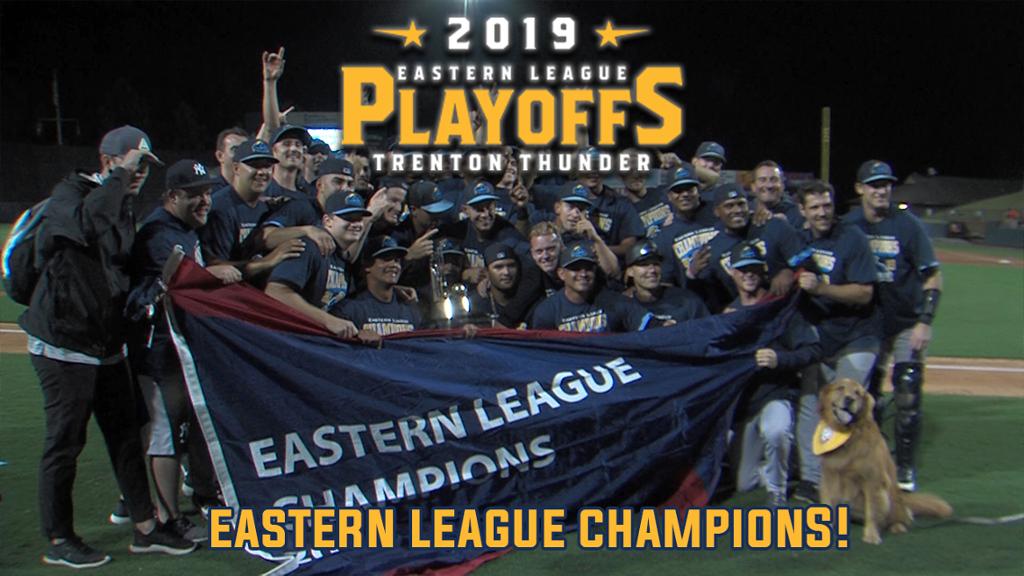 The league championship is the fourth in Thunder franchise history, and the team's first since 2013.

A three-run second inning for the Thunder began when Kellin Deglan wrapped a solo home run around the left field foul pole. Rashad Crawford later lined an RBI-single and score on a ground-rule double to right field by Zack Zehner, giving the Thunder a 3-0 lead. The rally knocked Bowie starter Tyler Herb (0-1) from the game after just two innings.

Chris Gittens padded the lead with a towering solo homer to right-center in the third, giving him a home run in two straight games to finish the year.

Rony Garcia (1-0) took a no-hit bid through five innings as the Thunder's starter. The right-hander retired 15 of the 16 batters he faced, with a leadoff walk to Mason McCoy in the third inning giving the Baysox their only baserunner off Garcia. He struck out six in the five-inning gem.

Isiah Gilliam produced the final Thunder insurance run of the evening on a seventh-inning RBI-single off Diogenes Almengo.

Greg Weissert, Trevor Lane, and Daniel Alvarez each pitched one inning of relief behind Betances. Alvarez allowed a one-out solo homer to Anderson Feliz in the ninth before eventually getting Jesmuel Valentin to pop out to second baseman Hoy Jun Park, sealing the league title for the Thunder.
0 x
"Leave the gun. Take the cannoli."
Top TORONTO — With minor league baseball done for the year except for Tuesday’s Triple-A championship game, Baseball America unveiled its annual classification All-Stars over the weekend.

This is good stuff that is a lot different from picking the best prospects in each league.

These honors go to players who had the best seasons in each class from Triple-A down to the Dominican Summer League, and for each class Baseball America names an All-Star for each position (including DH) plus five starting pitchers and a reliever.

How did the Yankees fare?

Of the 420 All-Stars, the Yankees only had two, and not making the cut were their top prospects, pitcher Deivi Garcia and outfielder Estevan Florial included.

The only Yankees farmhands honored were Canaan Smith as one of three low-A outfielders and Ezequiel Duran as the short-season Class A second baseman.

Nineteen organizations had at least three All-Stars. The Los Angeles Dodgers had the most with 10, followed by Arizona Diamondbacks and San Francisco Giants with eight, and San Diego Padres with seven. Others with at least four All-Stars were the Seattle Mariners (5), St. Louis Cardinals (5), Tampa Bay Rays (4), Boston Red Sox (4), Cleveland Indians (4) and Atlanta Braves (4).

The Washington Nationals, Chicago Cubs and Oakland Athletics had none, while the Philadelphia Phillies had just one.

Here is more info on the Yankees’ All-Stars:

Acquired: 2017 draft, 4th round as a high school senior out of Rockwall-Heath High School in Heath, Texas.

Notable: Finished second in South Atlantic League in hits, third in batting and OPS, and sixth in RBI.

Notable: Third-year pro finished first in New York/Penn League in homers, sixth in OPS, tied for seventh in RBI and tied for 13th in steals.
0 x
"Leave the gun. Take the cannoli."
Top

We are previewing the Yankees heading to Arizona to player in the AFL. Here is that feature:
https://www.pinstripedprospects.com/pre ... ent-46255/
0 x
Top

We are previewing the Yankees heading to Arizona to player in the AFL. Here is that feature:
https://www.pinstripedprospects.com/pre ... ent-46255/
0 x
Top

Aldred’s departure follows the departure of fellow pitching coordinator Danny Burrell, who left to take the pitching coach job at Georgia Tech. Aldred, who recently completed his 14th year in the Yankees’ organization, served as the Triple-A Scranton/Wilkes-Barre pitching coach from 2009 to 20015. He was a candidate for the Mets’ bullpen coaching vacancy after last season.
0 x
"Leave the gun. Take the cannoli."
Top

We had the chance to talk with Donny Sands after his big game last night in the AFL. Here is the story:

Users browsing this forum: No registered users and 7 guests