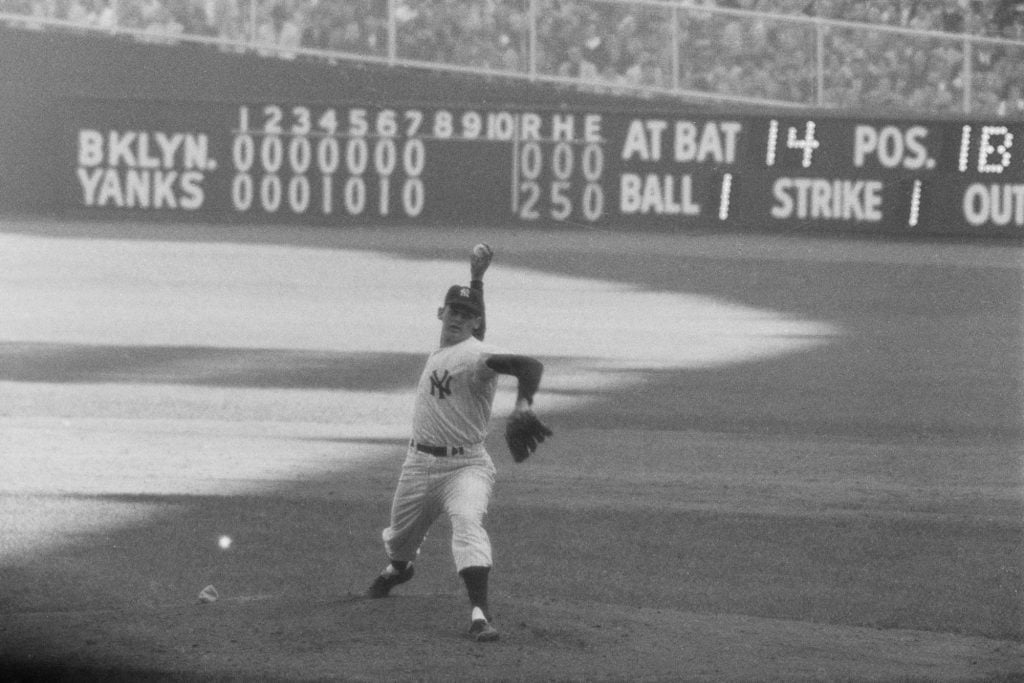 Don Larsen lived more than 90 of those years.

And yet, he seemingly never tired of people asking him about one perfect day.

He understood, just a little bit more each year, what that one perfect day meant to so many people, even people who were not alive when it happened, even people who didn’t know or care a thing about baseball.

The day was Oct. 8, 1956. It has, through the years, been dissected and mythologized and celebrated. It’s hard to know what’s true about the day and what’s legend. For instance, it has been told many times that Don Larsen had no idea he was going to pitch that game — World Series Game 5 between the Yankees and the Dodgers — until he came to Yankee Stadium and saw a baseball placed in the shoe in his locker. This was a Yankee tradition, putting the ball in the locker of the man starting the game.

“Larsen stared at the ball in disbelief without saying a word and gulped,” Lew Paper wrote in his fine book, “Perfect.”

Is this precisely true? Probably not precisely, no. Stengel had told reporters that Larsen was going to start the day before. “It was between Larsen and (Bob) Turley,” Stengel said, “We decided it would be better to have Turley in the bullpen today and tomorrow.” The fact that Larsen was going to start that game was well known enough that a few newspapers even included the betting odds.*

*”Larsen is rated a 13-10 choice tomorrow,” wrote the Rochester Democrat and Chronicle, among others.

But was it, in a larger sense, true that Larsen was shocked that he was pitching Game 5 of the World Series? Yes. The Yankees and Dodgers were tied at two games apiece, this was the pivotal game, and Larsen, well, he’d proven himself to be a risky bet at every turn in his career. Larsen was a tall and hard-throwing ran and erratic right-handed pitcher whose wildness on the mound fairly well represented his wildness off the field.

“Larsen,” his friend and fellow nighthawk Mickey Mantle once said, “was the greatest drinker I’ve known.”

Larsen went 3-21 for the Baltimore Orioles in 1954, but his timing was good — two of those wins were against the Yankees, one of them a shutout. Stengel (another nighthawk) was impressed by the pitching and undaunted by Larsen’s playboy reputation. He helped arrange to bring Larsen to the Yankees in a whirlwind 18-player trade, and Larsen pitched well enough in 1955 that Stengel gave him the start in Game 4 of that World Series against the same Brooklyn Dodgers. Larsen was clobbered and lasted just four innings.

During spring training of 1956, Larsen fell asleep while driving and ran his car into a telegraph pole. It was one of any number of Larsen-induced “headaches” (as the paper called them). There was some pressure on Stengel to dump him. But Stengel stood by his man.

Larsen pitched terribly for most of 1956, but again Stengel still stuck by his man.

And late that year Larsen — along with fellow Yankees pitchers Bob Turley and Mickey McDermott — began to pitch without winding up. The sportswriters were baffled by the trend. Larsen said he came up with the idea himself. Stengel always insisted that he had seen the great Negro Leaguer Bullet Rogan pitch without a windup, and so he suggested it to his pitchers who were having control problems.

Either way, the change worked beautifully for Larsen. He went 4-0 with a 0.52 ERA in September — hitters batted just .130 against him over that span — and he entered the 1956 World Series ready to redeem himself. Stengel gave him the start in Game 2.

“Don’t worry about my man,” Stengel told the press.

But, for the second time, Larsen proved unable to meet the moment. This time, he couldn’t find the plate. He walked two batters in the first inning but got out of trouble with a double play. He walked two more in the second inning and also gave up a single, and Stengel had seen enough. He pulled Larsen even though the Yankees led 6-1 at the times. Larsen was furious that Stengel showed so little faith in him — especially after the Yankees bullpen blew the game.

“I have nothing to say,” he barked at reporters after the game. “Not a thing.”

Larsen felt sure that he had blown his chance and was done for the series. Stengel was famous for burying pitchers who had let him down. But Stengel was also famous for being entirely unpredictable, for following his gut in whatever odd direction it led him.

The Dodgers came into the game with a plan: Be patient and let Larsen blow himself up the way he had in Game 2. It was a reasonable strategy; indeed, it seemed nearly foolproof. Larsen, over his career, walked about as many batters he struck out. He lost more than he won. He did not let the rigors of baseball interfere much with his thirst for living.

“The only thing Don fears,” one of his managers, Jimmy Dykes, said, “is sleep.”

“He’s one heckuva pitcher,” one of his teammates said, “when he wants to be.”

On this day, this perfect day, he wanted to be one heckuva pitcher. The Dodgers first batter, Junior Gilliam, just looked as strike three went by. So did the Dodgers second batter, Pee Wee Reese. Something indescribable had come over Larsen, something almost mystical. The day before, after Game 4, Larsen had driven back to the Bronx with a friend — probably the sportswriter Arthur Richman, though the identity wasn’t revealed in the papers — and rather suddenly said, “I got one of those crazy feelings that I’m gonna pitch a no-hitter tomorrow.”

“A four-hitter will be good enough,” the friend said.

“Nope,” Larsen responded. “It’s gonna be a no-hitter, and I’m gonna use my ghoul ball to do it.”

Larsen was a devoted, almost obsessive, comic book reader at the time, and he had grown convinced that he had his own superpower and that was the ability to throw a pitch called a “ghoul ball.” He never fully explained what the ghoul ball did. But whatever it was, he certainly had it going on that perfect day.

In the second inning, Jackie Robinson lined a shot to the hole between third and short. Third baseman Andy Carey made a stab for it but was only able to deflect the ball toward shortstop Gil McDougald. He tried to catch the ball out of the air but could not. So McDougald quickly grabbed the ball after it hit the dirt and fired as hard as he could across the diamond. The throw beat Jackie Robinson by six inches.

In the fifth inning, Larsen threw a hanging slider — “his one bad pitch,” catcher Yogi Berra would say — and Gil Hodges blasted a long fly ball to left-center. It would have gone out of most stadiums, but not Yankee Stadium. Mickey Mantle chased it down and made a fantastic running catch (“I was sure I’d get it easier than I did,” Mantle admitted).

The next batter Sandy Amoros blasted a ball into the right-stands. Umpire Ed Runge was standing deep down the line and called it foul. By how much? “That much,” Runge said, and he held his thumb and index finger four inches part.

In the eighth inning, Hodges checked his swing and cracked a low line drive that hit Carey’s glove and jumped a few inches in the air. Carey brought the ball back in for the out.

But mostly, Larsen didn’t need Ghouls. He was in control. The perfect day was mostly Don Larsen and Yogi Berra playing catch. Larsen got to three balls on just one hitter all game. “He was uncanny,” said home plate umpire Babe Pinelli, who poetically happened to be calling the last game of his 22-year career.

“I never saw him pitch like that before,” Berra said. “He never shook off one sign. He hit the glove wherever I put it.”

The last out of the perfect day was perfect in itself — Brooklyn’s Dale Mitchell watched strike three go by. It was as if, to the very end, the Dodgers could not quite believe what Don Larsen was doing. Nobody else could either. Yogi Berra leaped in the air and raced toward the mound and jumped into Larsen’s arms.

“I hope my Ma saw me,” Larsen told reporters.

Don Larsen is not in the Baseball Hall of Fame. There are people who think he should be; he was on the Hall of Fame ballot for 15 years, and he received as much as 12 percent of the vote one year. But, in the end, most agree that one day — even one perfect day — is not quite enough for Cooperstown. Larsen had a spotty career after his perfect game. He pitched for five different teams. He finished 81-91 for his career. He was, often, a better hitter than a pitcher; in 1958, he hit .306 and slugged .571. There were many scouts who believed that Don Larsen would have had a more productive career had the team that signed him, the St. Louis Browns, made him an outfielder.

But, of course, he would not have had the day. We are all more than our best day or our worst one. But Don Larsen did not mind being a symbol. He died on Wednesday at age 90, and everybody writes about his perfect day, and that’s how he would have wanted it, surely. “How many people get to be remembered for throwing a perfect game?” he asked, but it was more than just that. Don Larsen came to represent this deeply hopeful notion that any of us, no matter how flawed, can wake up one morning, find the baseball in our shoe, and just go out there and be perfect.
0 x
-------------------------
T15D23

During the 1956 AL season Yankees Manager Casey Stengel told a group of Yankees player, that included Don Larsen, Bob Cerv and others
that one of them was going to the Kansas City A's that winter. Larsen's Yankees Pitching career was saved by his Perfect Game in the 1956 World Series. Reserve OF Bob Cerv went to the A's instead. Bob told this story in a book about the Yankees.