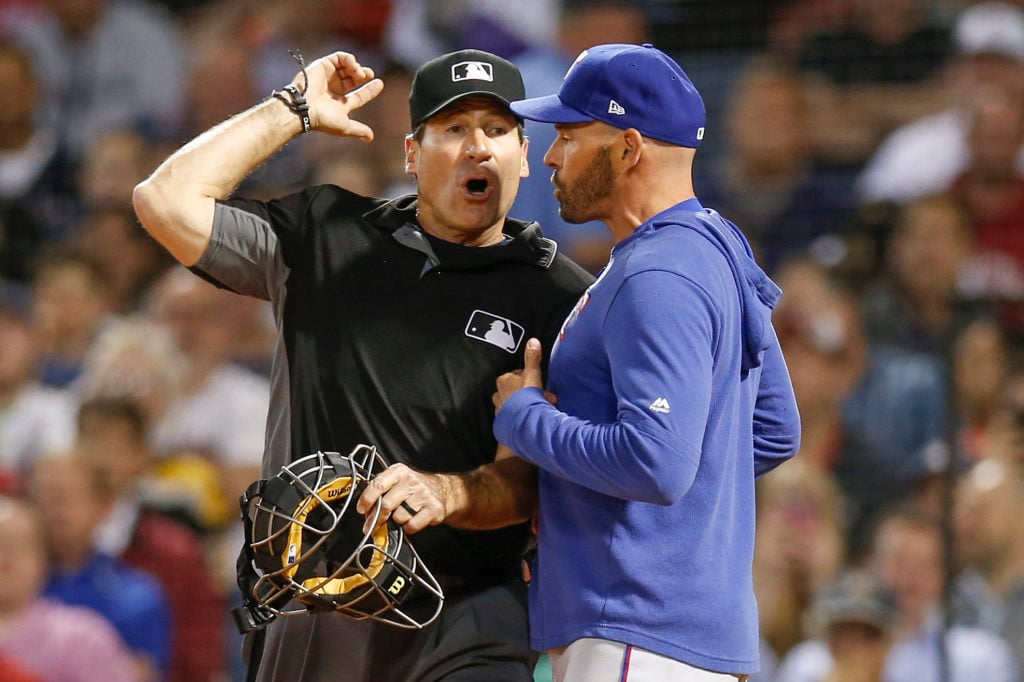 Employment discrimination lawsuits are difficult to win. They’re even harder when you do your work in front of a live audience. It’s like being in front of a large jury every day, with jury members unafraid to tell you how they really feel about your performance.

Hernandez initially filed suit against MLB in federal district court in Ohio in June 2017, claiming that MLB is discriminating against him because he is Latino (Hernandez was born in Cuba). In broad strokes, Hernandez alleges that as a veteran umpire (he started with MLB in 1993), he should be named a crew chief, a position he unsuccessfully applied for several times, and should be given the honor of umpiring more World Series. Both positions bring prestige and more money. Hernandez claims he has been passed over for those positions, in favor of less experienced —and white — umpires.

The MLB commissioner’s office evaluates umpires twice each season: at the halfway mark and after the World Series has ended. Umpires are evaluated on how they call balls and strikes; make judgment calls on game plays; get into position on the field to make accurate calls; signal calls; and handle arguments and other highly stressful situations on the field. According to his complaint, Hernandez has received above-average evaluations from the commissioner’s office throughout his career, with stellar reviews from 2002 through 2010.

That all changed, he says, in 2011 when Joe Torre, the former Major League catcher and longtime manager, joined MLB’s front office as Executive Vice President for Baseball Operations. Torre’s current title is Chief Baseball Officer, but his duties are essentially the same. Those duties include overseeing MLB’s umpires.

The complaint describes a 2001 incident in which Torre — then the New York Yankees’ manager —criticized Hernandez after a game for what Torre thought was a blown call during the game. “He would look like a fool” if he watched video of the call, Torre said, according to the complaint. “I think he just wanted to be noticed over there.”

Hernandez claims that since Torre joined MLB in 2011, the idea that Hernandez “just wants to be noticed” has “permeated” his evaluations, which have dipped overall, and led to fewer postseason assignments.

This is an odd emphasis in Hernandez’s complaint. If Torre holds a grudge, or has allowed his view of Hernandez from his managerial days to affect his evaluation of Hernandez since 2011, that doesn’t support a claim that Hernandez has been denied promotions because he’s Latino. The Torre twist undercuts Hernandez’s legal claim under Title VII, because it supports what is likely to be MLB’s defense: Hernandez does unnecessarily escalate on-field disputes, particularly when he’s accused of missing an obvious call, and isn’t as qualified for the crew chief position or postseason assignments as other umpires.

That’s certainly the view of many current and former MLB players, who in poll after poll, rank Hernandez as one of the worst umpires in baseball. And since the advent of Twitter, retired players have not been shy about expressing their disdain for Hernandez’s umpiring skills.

And while fans get angry about any call that goes against their team, just a quick Twitter search reveals scores of GIFs and memes calling out Hernandez for what the fans see as one ridiculously blown call after another.

Can you imagine if any of these fans end up in the jury pool for the trial?

Why did Hernandez want his discrimination case heard in Ohio, where Latinos make up less than 4 percent of the population? Because Ohio’s anti-discrimination statute, which Hernandez included in his original complaint, allows plaintiffs to seek unlimited punitive damages against a defendant if they can prove malicious or reckless conduct. New York’s statute does not.

Judge J. Paul Oetken, the New York federal judge presiding over Hernandez’s lawsuit, recently threw out the umpire’s claim under that Ohio statute because it conflicted with New York law. When it comes to damages, then, Hernandez will be limited to seeking back pay for lost promotions, compensatory damages for pain and suffering, and punitive damages up to a limit of $300,000.

Last week, Oetken issued another ruling against Hernandez. MLB had subpoenaed documents from the umpires’ union (the Major League Baseball Umpires Association) relating to any discussions between Hernandez and the union about his discrimination claims. The league also sought additional deposition testimony from Hernandez about those discussions. (Depositions are pre-trial examinations under oath). Hernandez asked the court to block the subpoena and the deposition, claiming a “union relations” privilege. A magistrate judge recommended that Oetken deny Hernandez’s motion after finding no basis in federal law for such a privilege. Oetken did just that.

No trial date has been set yet, but the two sides are nearing the end of what’s called “fact discovery” — when the parties exchange documents, take depositions and answer written questions under oath. Next comes expert discovery. In this case, that include experts on workplace discrimination and damages.

Before a trial, MLB is likely to ask the court to dismiss the case on summary judgment — a legal procedure that permits courts to rule on legal issues if the key facts are undisputed. That seems unlikely. So unless the case settles, we may be headed for a courtroom showdown. But this time, it will be Oetken calling balls and strikes.
0 x
-------------------------
T15D23

Users browsing this forum: No registered users and 20 guests