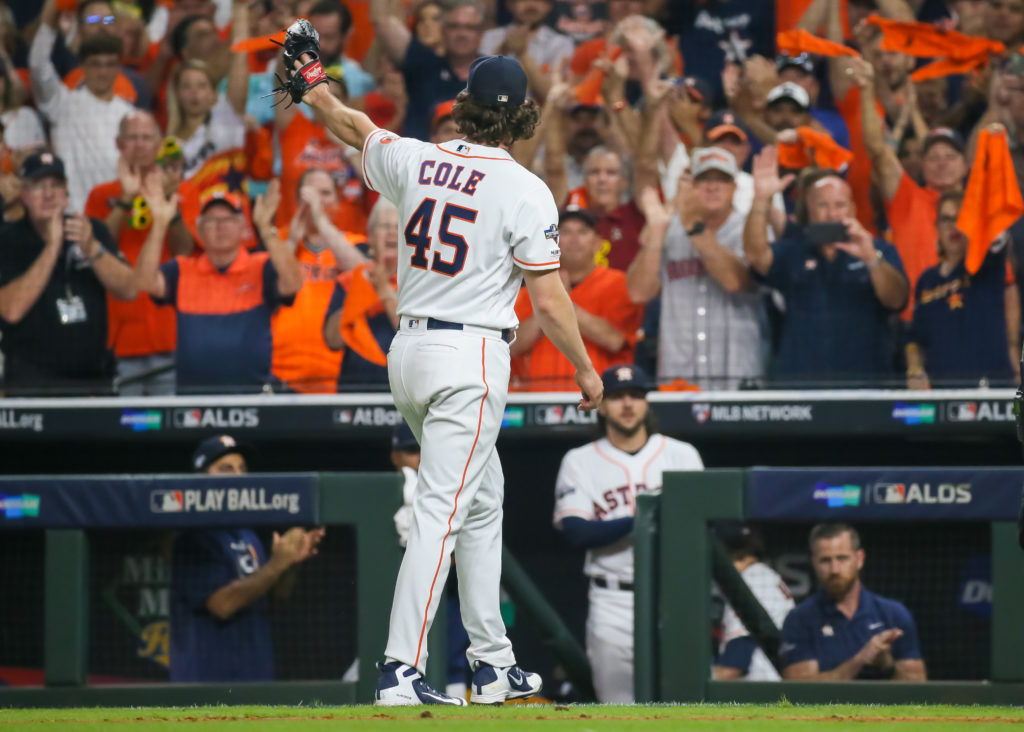 HOUSTON — For two harrowing days in October they’ve played the part of the fair-haired damsels, trying to escape the clutches of King Kong and Godzilla. So how’d that go for those poor Tampa Bay Rays? You know exactly how that went.

When you face the Houston Astros this time of year, you’re playing America’s least favorite hitting game, Pick Your Monster. You get to face Justin Verlander and Gerrit Cole, back to back? Cool. Doesn’t get much more fun than that. At least Nolan Ryan didn’t climb out of the box seats to pitch the ninth.

In Game 1, the Rays got to hang out 60 feet from Verlander as he was spinning off a seven-inning, one-hit masterpiece. Then in Game 2, it was Cole’s turn — to unleash 7 2/3 innings of insane 15-strikeout brilliance, in a 3-1 Astros win Saturday night. But even those raw numbers don’t really capture what the Rays have been up against. So let’s recap:

In these two games, against baseball’s two foremost dominators, the Rays have gone 5-for-45 — with 23 strikeouts. And we’re not sure which was tougher — trying to hit against Cole and Verlander or trying to believe that’s a real stat, in two very real games, involving two very real playoff teams.

Wow indeed. That. Really. Happened. And there’s also this: That’s never happened before.

Never in the history of any postseason series have two starters done what Verlander and Cole just did — pitch at least seven innings apiece in back-to-back games, give up zero runs each, allow no more than four hits and pile up that many strikeouts. Yes, that word was never.

Randy Johnson and Curt Schilling never did it. Sandy Koufax and Don Drysdale never did it. Jacob deGrom and Noah Syndergaard never did it. Pick out any two aces in history. What we just saw in Houston these past two days had never been done — until Verlander and Cole took the mound.

So we thought we’d give the Rays a chance to describe what that was like, to be on the other end of that sort of domination. They lived it. We just watched it. So sit back and let them tell you what they lived through.

Let the record show that Rays center fielder Kevin Kiermaier actually hit a double off Cole in the eighth inning on Saturday. That was notable for two reasons: 1) He was the first member of his team to reach second base against either Cole or Verlander, although he was the 54th to come to bat against them. And 2) it all but finished Cole’s evening, which ended one batter later after a two-out walk to Willy Adames.

But if you think that meant Kiermaier enjoyed his night of battling Cole — his other at-bats included a strikeout and a fly to center — well, let’s just say: Think again.

“I’m just glad everyone’s not like him,” Kiermaier said. “Or else I’d be in the wrong business. I’d be trying to go kick field goals or do something else.”

Kiermaier is now 2-for-9 lifetime against Cole, with four strikeouts, but he was proud of that double. It was the first extra-base hit he’d ever gotten off Cole.

“I was just banking he was going to try to get ahead with a heater right there,” Kiermaier said. “And I had a couple of pitches during the game that I kind of wish I would have taken advantage of. But whenever you get down, 0-1, to him, he’s in the driver’s seat from there. And especially 0-2. He’s just out there thinking, ‘All right, what pitch am I gonna throw to get another strikeout right here?'”

Cole has four swing-and-miss pitches — and he unleashed all of them on the Rays. He got 14 swings and misses on his supersonic fastball, which hit 100 mph on the radar board three different times after the sixth inning. He got 10 swings and misses on his curveball, even though he threw it just 19 times. He got eight more whiffs on his slider. And he got one on his change-up.

That adds up to an incredible 33 swings and misses — the most recorded in any postseason game in the 12 years of the pitch-tracking era. So what’s it like facing a pitcher who can make you look helpless with that many pitches? Kiermaier laughed.

“I try not to give guys too much credit,” he said. “But he definitely has that swagger about him where he knows he’s really good. And he knows he can get guys out with many different pitches, whether it’s the electric heater at 99, or that 92-mile-per-hour slider, or that 86-mile-per-hour hammer curveball. He’s really good. So you have to just go up there and try to pick a pitch to hit. Because if you just go up there and react off his stuff, it can be very tough.”

Once upon a time in a different life, Travis d’Arnaud caught one of baseball’s great 21st-century rotations in Flushing, N.Y. So he knows what great pitching looks like.

But even those 2015 Mets didn’t fire back-to-back 300-strikeout machines at you. So d’Arnaud readily acknowledged the greatness his team had just faced these past two days. Asked if Cole threw him a pitch at any point Saturday that made him just shake his head, d’Arnaud didn’t have to dig deep into his memory bank.

“Oh yeah,” he said. “First at-bat. He threw me a fastball (at 98 mph), and I think I swung, and the catcher, it was already in his mitt. Then he threw a slider right on the corner that if you take it, it’s a strike … but if you hit it, you’re not going to do anything with it.”

He shook his head. It was one of those nights.

“I mean, he kept guys off-balance,” d’Arnaud went on. “He kept me off-balance the whole day. He was tough. The same with Verlander yesterday. They were both so dominant.”

So the Rays went into both these games not so much trying to beat Cole and Verlander but to outlast them, to somehow get them out of the game and face somebody else.

Austin Meadows is one of the great young offensive players in the game. Just not when Cole is pitching. Once they played in the Pirates’ system together. Since then, Cole has done nothing but unleash one 0-fer after another on Meadows. He went 0-for-3, with a whiff, Saturday, making him 0-for-9 lifetime against Cole, with six strikeouts.

Meadows already has faced 251 pitchers in his brief big-league career. You know how many he has logged at least nine plate appearances against but has zero hits? Right you are. There’s only one: Gerrit Cole.

So this is what the baseball world is up against this October. The two most unhittable pitchers in this sport, coming at you back to back, turning the best hitters alive into the Bad News Bears.

Justin Verlander and Gerrit Cole have now gone to the mound a combined 30 times since the All-Star break. The Astros’ record when they start? How about 26-4. So if it’s any solace for those Tampa Bay Rays, it isn’t just them. They’re just the latest victims.

The Rays thought Verlander was at his dominating best in Game 1 — on a night when he got 14 swings and misses in seven innings. Then Cole went out and piled up more swings and misses than that by the fourth inning. Kiermaier tried his best to digest that fact.

“Good for Jeff Luhnow, or whatever their GM’s name is, for acquiring him,” Kiermaier deadpanned. “Like they needed any more than Verlander and (Zack) Greinke and all the other guys they have.”

Speaking of Greinke, he’s the next Cy Young up for the Astros in this series. He’ll be starting Game 3 on Monday in Tampa Bay. But if the Rays are looking for a little uplifting news, at least the Verlander/Cole portion of this series is over for a while. Or is it?

Naturally, Greinke went 8-1 in 10 starts after the Astros traded for him at the deadline. But guess which team handed him the loss? It was the Rays — in August. So for the battered and bruised Rays, at least they had that to buoy their spirits.

Users browsing this forum: No registered users and 5 guests