With his famous father in the stands, Brendan Lemieux shows toughness and talent in Rangers’ frantic comeback win
Rick Carpiniello 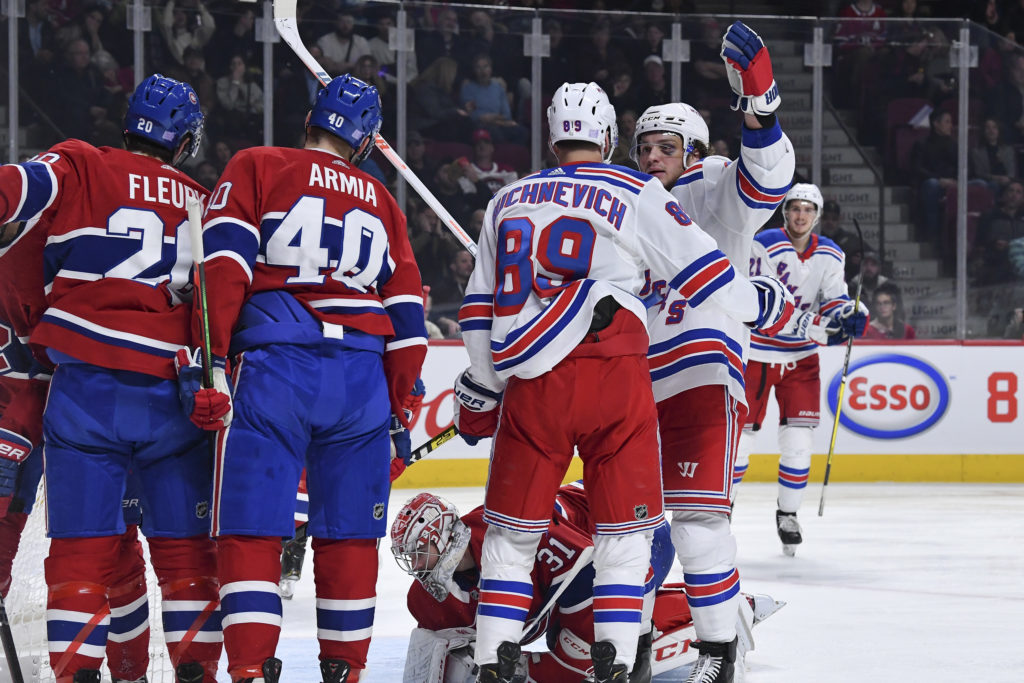 There are so many green kids in the Rangers lineup, and in their future, that we tend to forget some of the slightly older youngsters. Eight of them, age 21 or younger, have suited up for the Rangers this season. Some are going to be mega-players as the rebuild progresses. Some maybe won’t.

Then there are those who are a tad older, around the age of 23, and one, in particular, is as unique a player as any the Rangers have — or have had in a long time.

Brendan Lemieux, from the bloodlines of a Rangers nemesis and tormenter, is a potential difference-maker for so many reasons, starting with how he plays the game.

So there Lemieux sat Saturday night in Montreal, wearing the Broadway Hat to go along with a welt on his face, and a grossly blackened-and-bloodied eye, and a newly broken tooth, after scoring twice and being a general, but effective, pain in the ass in a remarkable comeback from a four-goal deficit in the Rangers’ 6-5 win.

They call him “Pepe” because that’s what they called his father, Claude, who, as a Canadiens rookie, once broke the Rangers’ hearts in a 1986 playoff semifinal round, and who, as a Devils veteran, was right in the middle of a post-playoff-game brawl. That series, (won by the Rangers in seven games) in 1992, ended with Claude Lemieux and Tie Domi having words in the handshake line — and to add another layer of irony, Domi’s kid Max was in Montreal’s lineup Saturday.

Claude was in the stands Saturday, the Bizarro-world scene of him cheering for the Rangers — the Rangers! Think about that! — as his kid scored.

Brendan is all his dad. Claude was a great and skilled player, hated for his irritating style, which lived on the border of dirty, and sometimes (often?) crossed it. Brendan’s the same way, and we’ll see what type of player he becomes in terms of skill. When he got here last season, in the Kevin Hayes deal that brought a first-rounder and Lemieux from Winnipeg, Rangers coach David Quinn said he thought Lemieux will be a top-six player. Maybe he will. Maybe not. This much is for sure: He will be the type of player the Rangers — with all their new young skill players — need now and in the future, although by accepting his qualifying offer over the summer, Lemieux could play himself into a reasonably big contract this season and might make it difficult to keep him.

So on Wednesday, in the Rangers’ biggest and best win of the season, Lemieux fought big, bad Tom Wilson in a nasty bout — after Wilson went elbow-to-head with Lemieux while Alex Ovechkin cross-checked him from behind. On Friday in Ottawa, Lemieux was picking up pieces of his tooth. On Saturday, well, he was in the middle of everything, scoring twice, including a short-hander that tied the score at 5-5. He also caused a too-many-men penalty, for which Quinn was angry but, given everything else, forgiving.

So his contributions add up in varying ways, and they sure as heck aren’t always subtle. He had one goal before Saturday, now he has three. Two of them in a game that really could have been another disaster — although the Rangers played considerably better than they had in Ottawa.

By the end, there were a lot of hugs for Pepe Jr., and a face only his father could love.

1) I know I should turn off my Twitter notifications during games like these. But people were actually clamoring for Igor Shesterkin to be called up from Hartford. (They also wanted people fired, OMG.) Well, first of all, do you really want to submit him to this kind of defensive play — by the forwards and defensemen — for his first foray into the NHL? No. Second, it will get pretty complicated when Shesterkin does come up, and there’d better be a plan for Alexandar Georgiev because Henrik Lundqvist is going nowhere, nor should he, until next season, if not through next season.

2) Meanwhile, Georgiev scuffled in the early part of this game, and Quinn considered pulling him for Lundqvist, but the kid found his game and was largely responsible for the comeback. And the comeback reminded many of the Feb. 19, 2008 game up at Bell Centre (or was it Molson Centre? Or something else?) in which the Rangers led 5-0 and lost 6-5 in a shootout. So, patience, revenge-seekers.

3) The Rangers looked as if they’d have a good start. Brady Skjei missed the net from the slot, off a pass from Jesper Fast, though he also got rocked by Shea Weber. Chris Kreider smoked Tomas Tatar with an open-ice hit. But it doesn’t take much for it to turn sour for the Rangers, who are understandably and deservedly a bit fragile sometimes.

4) My Great Aunt Tillie Could Have Scored: Georgiev lost the puck after making a save on a high shot by Artturi Lehkonen. Nick Suzuki tapped it across the crease and Lemieux got caught flat-footed and puck-watching as Son of Domi found it and easily popped it over Georgiev for a 1-0 lead just 2:03 into the game.

5) Jacob Trouba was called for a penalty. They’ve been destroyed on the PK lately (10 PPGs allowed in four games) but survived this one with three saves by Georgiev.

Trouba then forced a hard pass to Lemieux at the offensive blue line, but he couldn’t handle it. Mike Reilly broke it up and the Habs went the other way quickly. Lehkonen used Trouba as a screen and whipped a shot past Georgiev at the midway point of the first for a 2-0 lead. Lemieux hit a pipe behind Carey Price a couple of minutes later.

6) The Rangers stabilized for a while, but with 33.3 seconds left in the first, the Rangers failed to clear and Domi — who had zero goals in his previous nine games — fired one through Trouba’s legs and past Georgiev for a 3-0 advantage.

7) Early in the second period, Lemieux took a delayed penalty against Weber, who then blew a rocket past Georgiev for a 4-0 lead. Hoo boy.

8) Daily Bread: Skjei rushed the puck up the middle of the ice and dished it to Artemi Panarin (or did it slide off Skjei’s stick to Panarin?), who found Filip Chytil alone in right wing for a snap past Price to trim the Rangers’ deficit to 4-1. And really, the night before, Chytil was one of the Rangers who hadn’t been awful. High praise.

9) The Rangers got another gift goal when Brett Howden sent Pavel Buchnevich in on goal. Buchnevich tried to deke, then deke again, lost control of the puck, and it went in off the skate of Cale Fleury to cut the deficit to 4-2.

10) Ben Chiarot hit a post behind Georgiev, and Panarin drew a penalty. As the power play expired, with the second unit on, Lemieux — who is developing a really nice net-front game — deflected an Adam Fox shot past Price for his second of the season. First Lemieux loosened a puck from Weber behind the net. Good work by him to make it a one-goal game. The Rangers scored three goals in 3:20.

11) The Rangers had consecutive power plays but wasted 33 seconds worth of five-on-three and both five-on-fours. Just awful. Worse still, a lob pass that should have been knocked down by Trouba instead went off his glove for a Lehkonen breakaway that forced Trouba to hook him down. So the Canadiens got a power play and a chance to not only catch their breath but pad the lead. The Rangers killed it with a big block by Lemieux. Not only that, but now Quinn is using 21-year-olds Ryan Lindgren and Libor Hajek together on the penalty kill. Why not? Can’t be any worse than anybody else?

12) The Rangers were in fine shape as the third started, but Panarin lost his man, Lehkonen, in the slot as the Habs regained a two-goal lead. But the Rangers answered 30 seconds later, with Kreider setting up Panarin with a between-the-legs, behind-the-back pass to make it 5-4 with 14:09 left. Panarin’s seventh multi-point game in his past nine.

13) But Panarin took an interference penalty and the Rangers needed a big kill. Well, they got more than that. Skjei cleared the puck up the left wall, and Lemieux broke out two-on-one with Brett Howden. Lemieux gave it to Howden, who waited and gave it back with a saucer pass for a redirection to tie the score 5-5.

14) Trouba sent a seemingly innocent shot from the right point that might have ricocheted in front and beat Price for an improbable 6-5 lead.

15) The old too-many-men bugaboo is returning in a big way now, and the Rangers took one (third in five games) that wasn’t even close, with Lemieux the culprit, for a fifth Habs power play, during which Lindgren had a clear, and blocked a shot with his hand. The PK was 5-for-5. Lindgren returned and was on the ice in the final minutes with Fox and Price on the bench for an extra skater. That young D-pair was the Rangers’ best all night.

16) With 26.9 seconds left, Lemieux sent one at the empty net for a hat trick but missed the net for an icing instead, and the Rangers had to buckle down for the rest of the six-on-five.

17) Quinn Bin: So Quinn cites a perfect example of how far his players’ heads were up their you-know-whats in Ottawa the night before. Buchnevich, who does not kill penalties, jumped onto the ice during a penalty kill for a too-many-men penalty. But of course on Rangers Twitter it’s “Oh, that meanie coach is being a meanie to my favorite player again. He’s such a meanie.” … Not to mention the usual “hot seat” nonsense that follows every Rangers coach, and really every coach of every a New York team the moment things don’t go well.

18) Kakko-Meter: I thought the teenager struggled in his first game in Montreal, as many do. So did Libor Hajek. So did a lot of players, especially early, though, to repeat, it was much better than what went on 24 hours earlier.