With hat trick, Mika Zibanejad turns everything golden for the Rangers
Rick Carpiniello 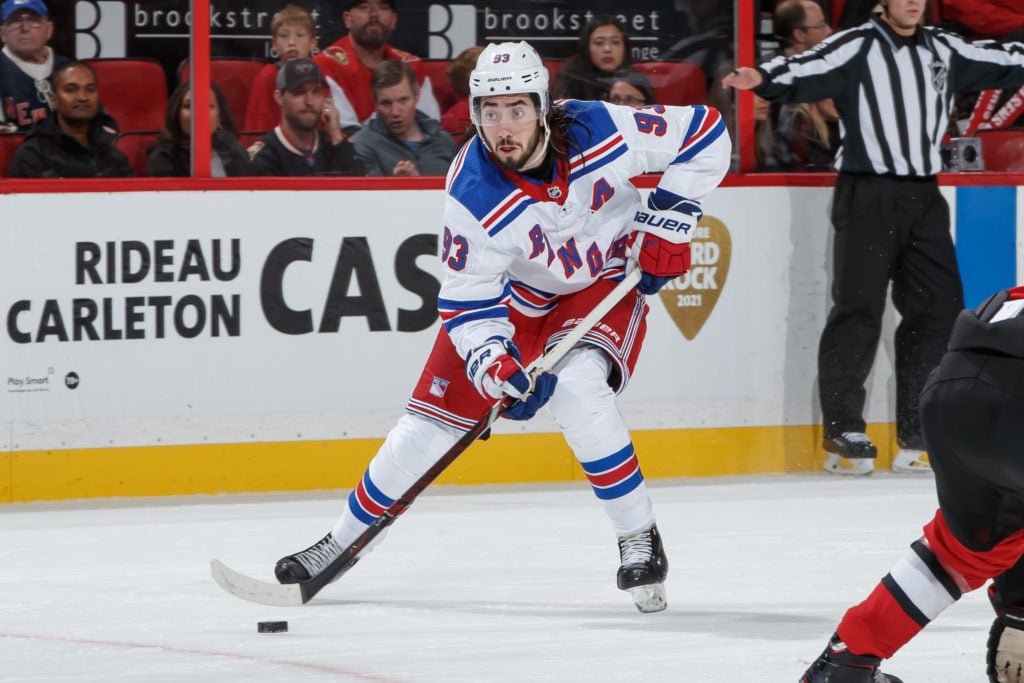 Everything else the Rangers center touched turned to gold. Midas Zibanejad?

The Rangers center — the greatest thievery of GM Jeff Gorton’s career, from Ottawa with a second-round pick, for Derick Brassard and a seventh-rounder — had a hat trick and an assist in a 4-1 win for the 2-0 Rangers.

He had a goal on the power play, one at even strength and one on the penalty kill. He has eight points in two games, all of them either goals (four) or primary assists (four). Zibanejad is the second Ranger with eight points in the first two games of a season (Hall of Famer Rod Gilbert in 1975 was the first). He has been on the ice for nine of the Rangers’ 10 goals. Oh, by the way, he won 18 of 22 faceoffs (not including the ceremonial puck drop by ex-Sen Chris Phillips).

No, Zibanejad can’t continue this pace for long. There are bound to be some dips, too, when he’s not even otherworldly, perhaps a hiccup or two when he doesn’t wear a cape and instead looks mortal. Maybe even some bad games.

So can he and his flaming-hot Bread and Butter Line mates and scorching power play get even better?

The answer is yes. Because Zibanejad is driven. He has been for a while, but now that drive is in overdrive.

“I mean, you get a player of that caliber, you want to step up your game, obviously,” Zibanejad said. “You want it to work. Sometimes, you can probably tell, you’re looking for him a little too much. But I think, just in general, it’s working out pretty good so far. But there are obviously areas we might see more than you guys take notice (more than goals) that we can improve and get even better at, and I think we’re trying to talk as much as possible to kind of get on the same page in all the different areas. I’m sure it will come more and more as we play together.”

This is a guy who had a career year, who arrived as a legit No. 1 center last season and wasn’t nearly satisfied. He wanted to be better. Much better. And to continue to get better. Not just year to year but also game to game, and in even smaller increments.

“I’ve said everything. I mean, he knows how I feel about him,” Rangers coach David Quinn said. “I’ve told everybody what a great player he is, and he’s gotten to a level I know he’s capable of getting to. I couldn’t be happier for him because there’s not a better guy, and he’s put an awful lot of work into it. I’m not surprised he’s getting the results he’s getting.”

Zibanejad has pushed and has been pushed by Panarin’s presence. Pavel Buchnevich, rewarded for a big finishing stretch last season with an opportunity to play wing on the Bread and Butter Line, looks like he doesn’t want to give it up.

“I think he’s pushed and he’s incredibly excited,” Quinn said about Zibanejad and Panarin. “And those two guys bring out the best in each other. And Buch has done a good job. Buch had a good night, too.”

The Panarin-Zibanejad-Buchnevich line has not been on the ice for an opponent’s goal in two games, Panarin and Buchnevich each on for seven goals by the Rangers.

The Bread and Butter Line’s power-play work together, with Chris Kreider retrieving pucks, screening goalies and tying up defensemen, and Jacob Trouba playing power play up top, is at times breathtaking.

“We’re working on it in practice, trying to be available, and all five guys can move the puck and are a threat out there,” Zibanejad said. “We just want to keep this going.”

After an eye-popping tic-tac-toe power-play goal those three executed, Zibanejad’s expression was one of “are you kidding me?”

“I was thinking the same thing watching that thing zip around like a pingpong ball,” Quinn said.

Zibanejad even apparently felt “filthy” wasn’t enough of an adjective for that goal (more on that later). So he described it as “gross, I don’t know.”

“That only happens with those two,” he added. “Panarin with that first pass, and I just tried to get it over to Buch. That’s one of the few guys I know that’s going to be able to pass that back and not shoot it. I thought I made a pretty good pass and gave him an empty-netter, but apparently he didn’t want it. So I’m happy I was ready for it, and luckily it went in through (goalie Craig Anderson’s) legs. I think it hit the post (and went in). It was an unbelievable play, and I was just happy I was in the right spot.”

Quinn was still shaking his head, but it’s always smarter for a coach to tap the brakes than for a fan (or a reporter) to do it.

“Those guys have done it before,” Quinn said of the highlight goal. “They did it in the preseason a couple of times, and they’re starting to form some chemistry. It’s only Game 2, but one of the things that we need from them is they’ve got to be a complete line. And as great as this is, they’ve got to continue to work on every aspect of their game, and I think that will happen over the course of the season.”

Yes, they can get better. Think about that.

1) There was some news about top Rangers defense prospect K’Andre Miller being suspended for breaking team rules at the University of Wisconsin, where he’s a sophomore. There weren’t many details, and when there are no details you wonder how bad his transgression might have been. So I checked with Badgers coach Tony Granato, who said, “Nope. Nothing major. I have done the same with probably seven or eight guys already. … It is exactly what it is. He broke a team rule and is suspended for (Sunday’s) inter-squad game. Nothing more.”

2) Meanwhile, Alexandar Georgiev continues to get lost in the Rangers’ hoopla. But in his season debut, he was pretty fabulous, just as he was behind that mess at the end of last season. When can we say this kid is an NHL No. 1 goalie? Soon? Really, there were times that the Senators came at the Rangers hard, and when the Rangers didn’t, in Quinn’s words, “manage the game” very well. It could have gone wrong if not for some of Georgiev’s saves.

3) Georgiev had one of the best seats in the house to watch the show down at the other end. “There is so much skill there, and sometimes I don’t even look at the puck because it’s going side to side,” Georgiev said, waving his hand like a ping pong paddle. “Crazy skill. Those guys are playing great.”

4) Quinn broke up two of the three defense pairs from the very imperfect 6-4 opening win over Winnipeg on Thursday when the Rangers didn’t defend well at all. But as was the case the past two years or more, those defensemen didn’t get a ton of help from the forwards, most of whom don’t excel in the back 100 feet of the rink. So Libor Hajek moved up to the first pair with Jacob Trouba, and was better. Trouba was better, and the Rangers’ first pair, minus Brady Skjei, was better. Skjei played with Adam Fox, who was also better in his second NHL game. Fox banked a long stretch pass on Zibanejad’s second goal. You had to like it when Hajek jumped into the fray, against Anthony Duclair no less, when Trouba was double-teamed in front in the third.

In Game 2, Ottawa’s home opener, the Rangers were much more organized and attentive to detail. But this also wasn’t Winnipeg (though it was almost Winnipeg cold in Ottawa for early October — at least the Rideau Canal was water, not ice).

5) Man, this new Rangers power play might be something special. Six minutes in, the Rangers went on the power play and had the puck on a string — although they passed up a couple of chances to one-time shots, instead passing. Ultimately, Zibanejad banged in a Trouba rebound for his fifth point in less than four periods (he was awarded an assist, after the game, on the empty-net goal on opening night). It was also Trouba’s fourth point. 1-0.

6) Daily Bread: Not to repeat myself, but I’m going to be repeating myself a lot about this: Panarin isn’t just an offensive star, but he’s a great hockey player. I mean, twice on one shift in the middle of the first he cut across the ice to separate one of the Sens from the puck, the second resulting in a Zibanejad break-in on which Zibanejad lost control of the puck in close. He “hunts the puck,” as one Rangers front-office person said. He also makes these soft little saucer passes even better than Mats Zuccarello used to make them. Late in the second, with Skjei and Fox beaten off a turnover, Panarin busted it back to break up a golden Ottawa chance at the left post.

7) Marc Staal was cross-checked by Quinn’s B.U. boy Brady Tkachuk in front of Georgiev, and they became entangled after a retaliatory slash to the back of the legs by Staal. Those two would battle all night. But this battle was won by Tkachuk when Thomas Chabot’s shot went in off his leg (assist by J.G. Pageau — does that name still haunt you?). 1-1. It wasn’t a memorable shift for any of the guys on the ice (Brett Howden, Vlad Namestnikov, Jesper Fast and Tony DeAngelo were the others). Georgiev kept it tied with a pair of close-range saves on the next two shifts. Early second, Georgiev exploded post-to-post to rob Artem Anisimov during a Senators power play.

9) And, oh yeah, he kills penalties. So Zibanejad finished off his hat trick with a swipe of a loose puck on the penalty kill (after Brendan Smith blocked a shot), got away from Bobby Ryan’s diving poke-check attempt and broke 2-on-1 with Lias Andersson. The Senators’ Erick Brannstrom tried the snow angel, as if that had a prayer, and Zibanejad simply pulled the puck back, waited for Brannstrom to continue to slide out of the play, then snapped one past Anderson. Once again, Shishkebab. 3-1.

10) Early third. Another Rangers power play. Another game of keep-away. Buchnevich eventually got it to Zibanejad outside the crease, and Zibanejed, instead of firing it, sent a pass for a Panarin one-timer from the left circle. 4-1.

11) Hey, just want to mention that I mucked up my comparison of Staal’s season-opening goal to the famous Matteau, Matteau, Matteau goal. I said they were in opposite ends of the rink. But I’m looking down on the rink from a new perch now, 180 degrees from the old pressroom, 90 degrees or so from the old press box. I got confused. Both goals were scored in the same end of the ice, on the 8th Avenue side. Apologies.

12) Kakko-Meter: Kaapo Kakko’s line with Kreider and Ryan Strome didn’t do much for a second game in a row. The kid looked fine, competed, but didn’t get a lot accomplished. He’s 18. Remember that.

13) Good Tony, Bad Tony: Early on, Tony DeAngelo was beaten to a loose puck behind the net, but he didn’t get burned because Colin White couldn’t handle a bouncing pass right in front of Georgiev. But overall, DeAngelo and Staal — the one pair left together — were more than fine. If DeAngelo continues to play as he has through two preseason games and then the last two, I may have to discontinue this department.

14) Quinn Bin: No changes off a win, other than the D shuffling and the goalie switch. So Micheal Haley and Greg McKegg remained scratched, rather than Binned.

Users browsing this forum: No registered users and 2 guests